Who is abducting, torturing & murdering college-aged men in the US and UK? 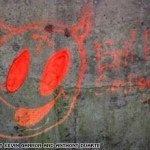 The cryptic graffiti left at a scene.

For the past 20 years, hundreds of college-aged men have disappeared, silently, soundlessly, vanishing without trace, only to be found some time later, dead in the water, but with no water in their lungs. They did not drown. Many are still missing…

Who are The Smiley Face Killers?

These men are abducted, held for a period of time, murdered, then disposed of in bodies of water.

The original investigators found graffiti near the scenes, frequently with the Smiley Face symbol…

In almost every case, the authorities have ruled the deaths ‘accidental’… but something far darker is at work here….and it isn’t stopping.

A long history and a growing number of chilling unsolved disappearances and murders of young men in cities, who vanish for several days, or several weeks, and are later found in water.

The Smiley Face Killers: Who is Abducting, Torturing and Murdering College-Aged Men in the US, Canada and the UK?

The Secrets of the Smiley Face Serial Killers….

The Smiley Face Killers: Who is abducting, torturing & murdering college-aged men in the US and UK?

Who are The Smiley Face Killers?

The Mystery Vanishing of Peter Gibbs